It was my dad’s birthday a couple days after I got back from Argentina (strategically planned), and after a month without baking, I was itching to make something! I made a chocolate cake using the same recipe as Charlotte’s birthday cake from a few months back, making adjustments in the decorating. In addition to making chocolate buttercream, I also made strawberry buttercream. Here is what I did.

Ingredients
Strawberries (I used fresh, but you can use frozen), about half a cup
1/2 tsp lemon juice
A few drops of red food colouring

I boiled the strawberries on medium heat until they were very soft and looked like jam. I added the lemon juice, then strained the puree into a bowl to get rid of the seeds and big chunks of strawberry. I added this to a portion of the buttercream, and added a few drops of red food colouring, just to make the colour stand out on the cake. 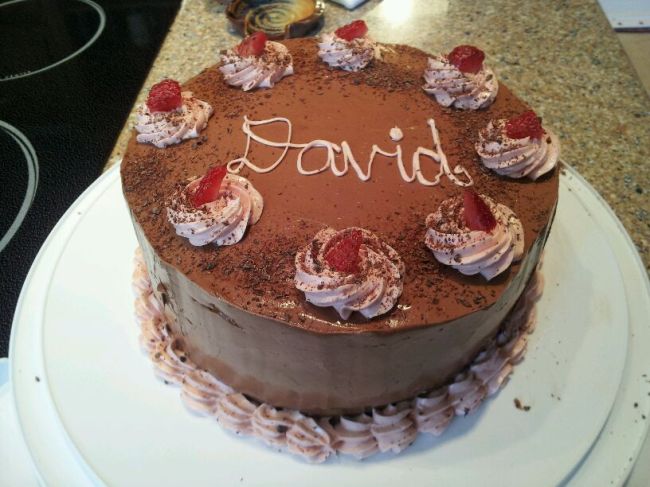 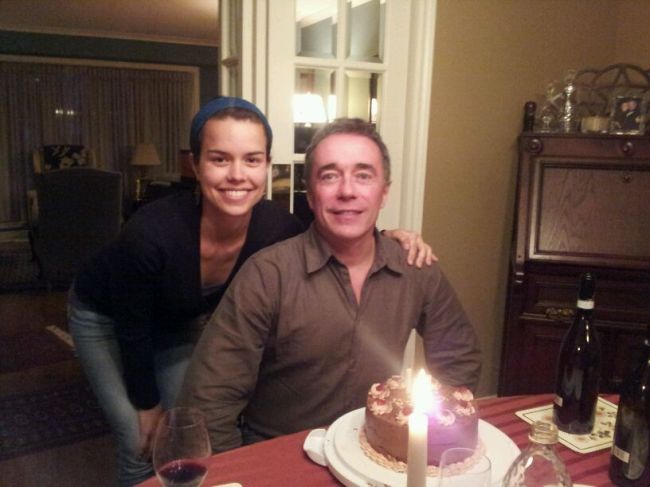 For supper I made empanadas, in addition to the roast beef and green beans my stepdad made. Empanadas are a commonly eaten snack or meal in Argentina, and I ate a lot of them while I was there. I had many different kinds, all involving meat: chicken, beef, and ham and cheese. My host mother let me copy some recipes from one of their cookbooks, so I can now make my own in Canada. I decided to make spinach and ricotta empanadas.

I combined the dry ingredients in one bowl, and the wet ingredients in another bowl, and then added the wet to the dry. I kneaded the dough for about 10 minutes, until it was very elastic. With a rolling pin I rolled out the dough, slathered some melted butter on top, rolled up the dough very tightly, then cut it into about 24 pieces. I rolled each piece into a disc about 3-4 inches round,

In a frying pan I sauteed the onions and shallots in butter until they were clear-looking. I added the spinach and let it lightly cook so that it shrunk in size, then added the remaining ingredients. 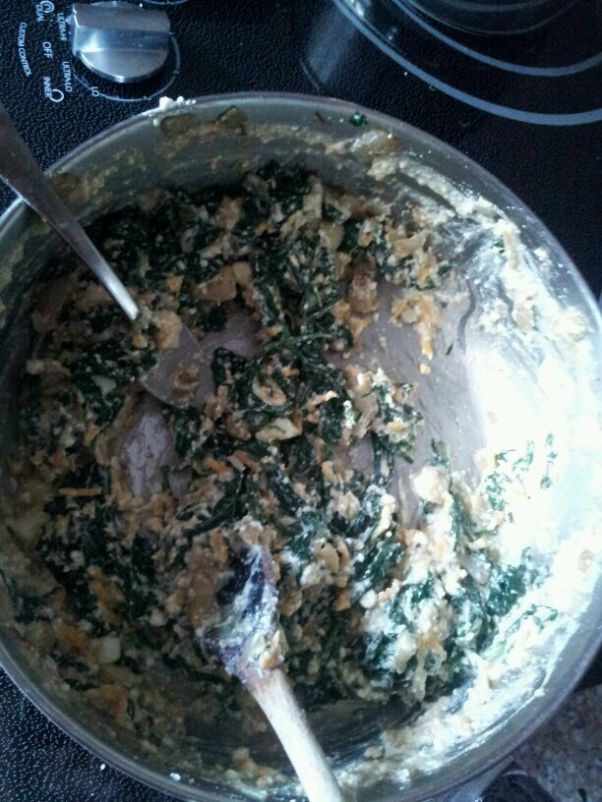 To assemble, I filled the dough discs with about 1 tsp filling. I brushed the edges of the disc with water and sealed them into a half-moon shape, then crimped the edges. Next time I would also brush the dough with the remaining butter. The empanadas were baked at 350 degrees Fahrenheit for about 25-30 minutes, until golden brown. 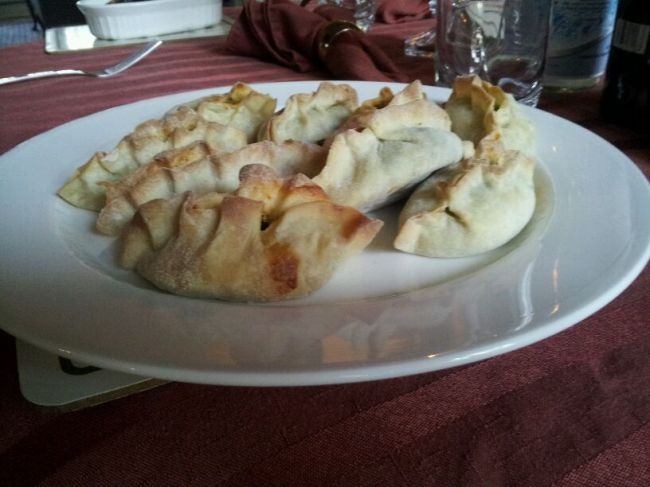 They turned out well, and I will definitely be making more in the future. I just need to find a way to make them vegan, as I am about to embark on that journey this summer once I move to Calgary. I will definitely be vegetarian, but being vegan might be a bit more tricky (but that’s the goal!).

This is in reference to my last post about cake. I came across this song while baking, and it made me smile. Cakes are probably my favorite thing to bake because there are so many steps involved, and the end result can be very rewarding. My favorite part is definitely the cake decorating. Who doesn’t love cake?

Today is a special day – my best friend since forever turns 23. I decided that my birthday gift to her would be a birthday cake. Over the years, Charlotte has given me some very thoughtful gifts; most notably are the ones she has made herself: a dress, a pillow with “BU” written on it, pajama pants, and a sweater with the Bishop’s song on the back (all of these items were purple!). She definitely has a knack for sewing. Home-made gifts are the best, and I wanted to reciprocate with something that I can make: cake.

I got the recipe for “Perfect All-American Chocolate Butter Cake” from The Cake Bible by Rose Levy Beranbaum. The book recommends that all ingredients be fresh and at room temperature. Do not be afraid of eggs being at room temperature – in France they are always kept that way! Also, when a recipe calls for baking powder and flour, sifting them together twice makes sure the baking powder is evenly distributed within your batter (a little something I learned at Cordon Bleu). 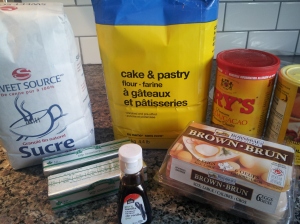 I mixed the cocoa powder and boiling water in a small bowl with a whisk and let it rest until it reached room temperature. Meanwhile, I combined the flour, sugar, baking powder, and salt in a large bowl. In a separate small bowl I mixed the eggs, vanilla and 1/4 of the cocoa/water mixture. Then, I added the rest of the cocoa/water mixture to the dry ingredients, as well as the butter, and used a mixer on medium speed to beat it for about 1 1/2 minutes. The cookbook says that this develops the cake structure. I then added the egg/cocoa mixture in three batches, mixing on medium speed for 20 seconds after each addition. I scraped the sides of the bowl to make sure all the ingredients were incorporated, and poured the batter into two 9-inch round pans that I buttered, floured, and put parchment paper circles at the bottom. The worst surprise after taking your beautiful cake out of the oven is to have it stick to the pan, so better be safe than sorry!

I baked the cake at 350 degrees Fahrenheit for 25-35 minutes, or until the cake sprung back when touched. My cake took 35 minutes. I removed the cakes from the pan after letting them stand for ten minutes, and let them cool for about an hour. 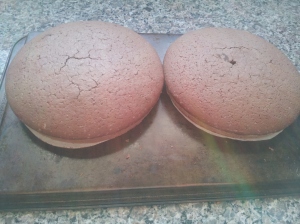 Next, I made chocolate butter cream frosting, and it made a lot extra.

Butter cream is a recipe I learned how to make at Cordon Bleu, and I made it using their method, but used the ingredient measurements from The Cake Bible.

I whisked the egg yolks with some of the sugar using a mixer and mixed until they lightened in colour. Then, I boiled the sugar and water until it reached soft-ball stage – to test that it is at this point, I soaked my hand in ice-cold water, reached in to the boiling liquid to grab some sugar, and immediately dunked my hand back in the ice-cold water with sugar in my hand. When the sugar forms a hard substance inside the cold water that resembles candy, it is at soft-ball stage (the sugar can also be formed into a ball, and when thrown on the counter, it makes a sound).

With the mixer beating the egg yolks, I slowly drizzled the liquid sugar on top, making sure to mix everywhere. I kept beating the mixture until the bottom of the bowl reached room-temperature, which took about 5 minutes.

In a separate bowl, I melted the butter until I could whisk it smoothly. It should look like the picture below. The egg mixture and this mixture should look very similar. I added the two together with my hand mixer.

In another bowl, I melted the chocolate on a double boiler, and added it to the butter cream. I reserved a little bit of the plain butter cream for decor. 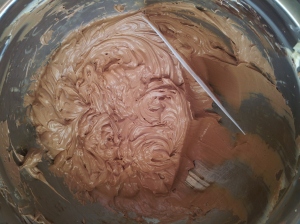 To assemble the cake, I cut off about 1/2 cm of cake from the rounded top of each layer to make them flat. Then, I covered the cake in butter cream, and added a little bit of decor on top. 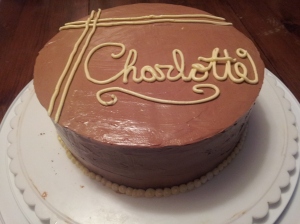 Over the summer I read a lot of articles in the Globe and Mail’s Food section, and one day I came across an article claiming that tomatoes are delicious in desserts. Ever since, I have been curious about how a tomato cake would taste, and today at work I had time to bake something new. January is a bit of a slow month for bakeries, and at  Life of Pie we have the opportunity to explore with recipes if we have time. I found the recipe for tomato cake from from cdkitchen.com 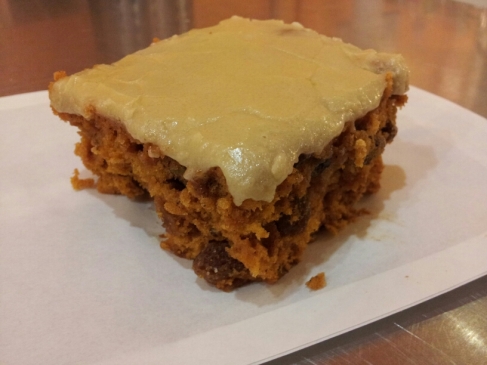 Cream together the sugar, shortening, eggs, baking powder, and flour. Mix baking soda with tomato soup and add to mixture. Mix in spices, raisins and nuts. Pour into a square baking tray and bake at 325 degrees for 30 minutes. My cake was done in 15 minutes, probably because I used a large baking pan.

In all, the cake tasted good. The tomato soup made it quite moist, and the flavours went well together. To be honest though, I think I had built it up in my mind and was expecting something ridiculously delicious. This recipe uses a can of tomato soup, so perhaps the outcome would be different using fresh tomatoes. I also think the cake could have used some salt – when cooking, my stepdad always tells me how much tomatoes need salt – and I was surprised that the recipe I found did not call for any. The cake was a teensy bit bland, and perhaps a 1/4-1/2 tsp of salt is all it would have needed to have more flavour. I also would have liked the cake better without raisins.

The verdict: this will not be the last time I bake with tomatoes – there is a lot more exploring to be done! Perhaps next, some tomato ice cream? In the mean time, if you happen to be in Ottawa and happen to be near old Ottawa south, stop by Life of Pie for a slice of tomato cake!