After eating vegan pizza at Gratitude Cafe a few weeks ago, I finally found the secret to making vegan pizza: nutritional yeast. I think some people are hesitant to go vegan because they think they will have to give up their favorite dishes, but it seems as though there are substitutes for everything, and they are usually packed with nutrition. Don’t get me wrong – lately I have been really hankering for an egg salad sandwich. Being vegan is not easy, but it is good to know that one must not be deprived of something as delicious as pizza.

Pizza is one of my specialties, and what I love about it is that you can throw pretty much anything on it, and as long as you remember to mix the dough a couple hours before dinner time, it is pretty simple. When I was a cheese-buying omnivore, the pizza I made used almost an entire brick of cheese, which can be expensive and quite fattening. This recipe uses entirely plant-based products, so it is high in vitamins, fiber, and protein (nutritional yeast is a complete protein).

I carefully stirred the yeast into the warm water and let it rest for ten minutes. In a large bowl  I combined the flour, salt, and oil. With a wooden spoon I combined the wet ingredients to the dry until combined, formed the dough into a ball, and placed it back in the bowl (slightly coating it in oil all around), covered with a tea towel. The dough must rise for at least an hour, but two hours is the most ideal.

Once the dough rose, I kneaded the dough for about five minutes, then divided it in two and rolled out each piece into the shape of my pan. This time I used two different methods to bake the pizza: a pizza stone for one pizza (to be baked in the oven), and tinfoil for the other (to be baked on the BBQ). In the past I have just put the pizzas on a cookie sheet. No matter what, I always lightly oil and flour the baking surface to avoid sticking; however, treatment of the pizza stone is different. I allowed the stone to heat up with the oven, then lightly floured it when I was ready to assemble the pizza.

To assemble the pizza, I first sauteed the onion, peppers, and garlic with a little bit of oil, then added the basil, salt, and pepper. Meanwhile, Tom BBQed the spaghetti squash in quarters until it was tender, and in a bowl I mixed the shredded carrot, spaghetti squash and nutritional yeast (this is the cheese part!). I spread the tomato sauce onto each pizza, then layered the sauteed veggies, followed by the “cheese”. I also sprinkled some more nutritional yeast to top off the pizzas, and added arugula in the last minute of baking.

Each pizza baked at 500 degrees Fahrenheit for 20 minutes. It was amazing to me that each pizza tasted different because of the way they were baked. Next time I will use the pizza stone on the BBQ now that I know how well the BBQ method works.

This recipe is DELICIOUS. No more will I buy fake-tasting vegan cheese now that I have discovered nutritional yeast! 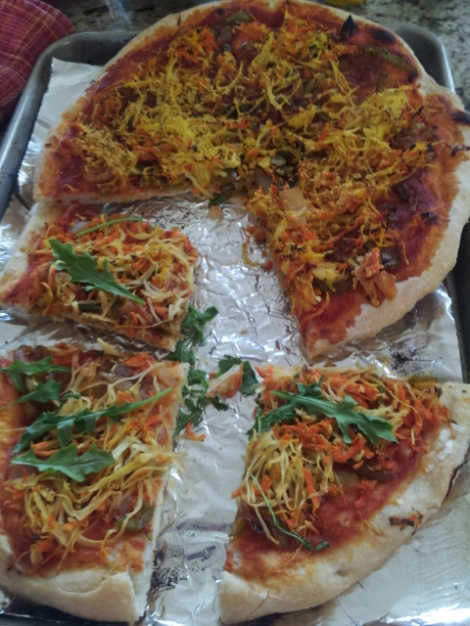 After watching “Vegucated“, a documentary that follows three people as they are challenged to become vegan for six weeks, I have become motivated to eat less meat and use fewer animal products. I decided that rather than going completely vegan, I will eat vegan when I can, and explore different recipes that are vegan and/or vegetarian. I started with mini polenta pizzas, which is a vegetarian recipe.

This recipe was based on the “Pizza Polenta” recipe from ‘Pas Besoin d’Être Végé pour Aimer ce Livre”, which was given to me by my boyfriend Tom, who promised he would speak french with me every time we made a recipe from this book. The recipes are by 35 famous chefs from around Quebec and this recipe is by Gilles Herzog. It includes a recipe for the polenta dough, but there was no polenta flour to be found at the grocery store I was in, so I had to settle for a pre-made polenta dough (I know, gasp!). This is just one of the fun parts of cooking – sometimes you have to improvise when you can’t find what you are looking for.

I started by making the tomato compote by placing 8 tomatoes (cut into quarters and seeded), 1 tbsp brown sugar, 2 tbsp olive oil, and salt in a baking dish and covered it with aluminum foil. I let it bake in the oven for 2 hours on 300 degrees Fahrenheit .

Next, I would have made the dough if I had found polenta flour:

Bring vegetable stock to a boil and incorporate the goat cheese, olive oil, salt, and pepper. Whisk in the polenta flour and let cook for ten minutes, making sure to stir it often. Place the dough in a dish covered with parchment paper and let it harden in the fridge. Form it into a cylinder so that you can cut it like a loaf of bread into mini pizzas.

Next, I made the Black Olive Coulis. I placed 1/2 cup pitted black olives, 1 tbsp capers, 3 tbsp olive oil, and pepper in a blender or food processor and blended until smooth. 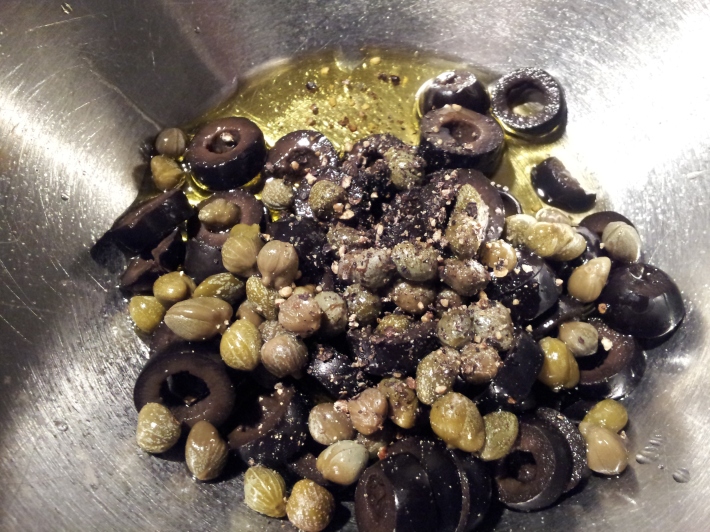 Next, I sautéed 2 zucchinis, 1 clove of garlic, 1/2 tbs fresh thyme, 2 tbsp olive oil, and salt and pepper to taste, for about 3 minutes. 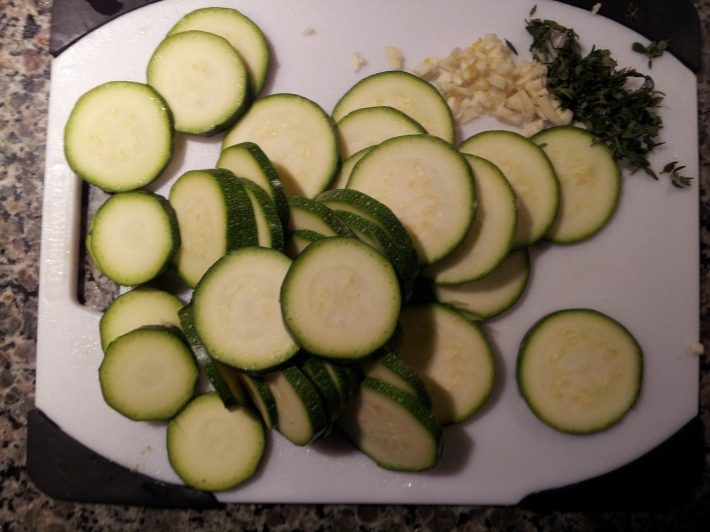 To assemble the pizza, cut the polenta dough into disks and layer the tomato compote, followed by the zucchinis on top. I started with a layer of goat cheese because I was not able to put it in the dough. Bake on a cookie sheet covered with aluminum foil for 15 minutes at 300 degrees Fahrenheit. Serve the black olive coulis on top of the pizza, and toss some of the olive coulis with 3 cups of arugula. With a mouthful of pizza, olive coulis, and arugula, it was pretty tasty! 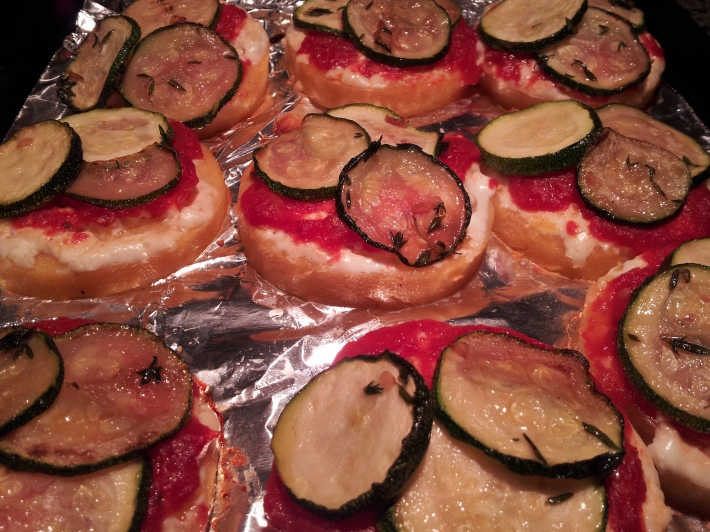